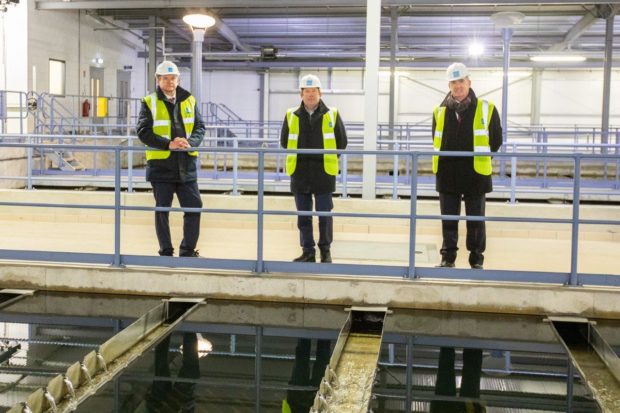 Irish Water’s Managing Director, Niall Gleeson and Fingal County Council’s Chief Executive, AnnMarie Farrelly welcomed Minister for Housing, Local Government and Heritage, Darragh O’Brien, Chairman of Ervia, Tony Keohane and Deputy Mayor of Fingal, Cllr Robert O’Donoghue, to the Leixlip Water Treatment Plant to see first-hand the progress being made on the upgrade of the old water treatment plant. The delivery of the upgrade will safeguard the water supply for homes and businesses in the Greater Dublin Area (GDA).

The works started in June 2018 and are being carried out as quickly and as safely as possible whilst maintaining a safe drinking water supply to more than 600,000 people across the GDA.

Irish Water says a significant milestone has been reached as 15 filters have been upgraded and are now operational. Each of these filters can process up to 12 mega litres of water per day, that’s the equivalent of 5 olympic sized swimming pools. The work to install an ultra-violet disinfection system will be completed early next year resulting in a safer more secure water supply for homes and businesses served by the plant. Furthermore, they say risk of any future Boil Water Notices will be greatly reduced.

Irish Water is also delivering a number of other significant projects to further support the water needs of the GDA now and into the future. Irish Water is upgrading the Vartry Water Supply Scheme by building a new treatment plant in Vartry, and upgrading the treated water reservoir at Stillorgan, these upgrades are due to be operational next year.

Irish Water has recently started work on the construction of a strategic link between Srowland and Ballymore Eustace water treatment plants which will help to build resilience in the water distribution network. This project will allow the production of up to an additional 18 mega litres of drinking water per day from Srowland water treatment plant for communities in Kildare and the wider GDA.

Along with our Local Authority partners, Irish Water is also fixing leaks and upgrading the water supply system. As part of our leakage reduction programme, Irish Water has replaced over 100km of water mains in the Greater Dublin Area since 2018, which is the equivalent of two M50s.

Speaking at the Leixlip Water Treatment Plant, Minister for Housing, Local Government and Heritage, Darragh O’Brien, said, “The upgrade of the old Leixlip Water Treatment Plant demonstrates how Irish Water, working in partnership with Fingal County Council, is delivering infrastructural improvements that are critical for our communities and our economy. This is the second largest water treatment plant in the country and supplies water to more than 600,000 people through a vast network of pipes. The delivery of this project along with a number of other ambitious projects across the GDA will help to support existing and future residential and commercial development.”

Drought and other water-related risks have in recent years threatened the sustainability of South African businesses, demanding they take...

BREVARD COUNTY, Fla. — In a unanimous vote on Tuesday, the Brevard County Commission began the process that Commission...

Axis deer starve to death amid drought on Molokai

The North America shotcrete equipment market size was valued at $612.4 million i…

Dayton to test for ‘forever chemicals’ in-house, thanks to new equipment